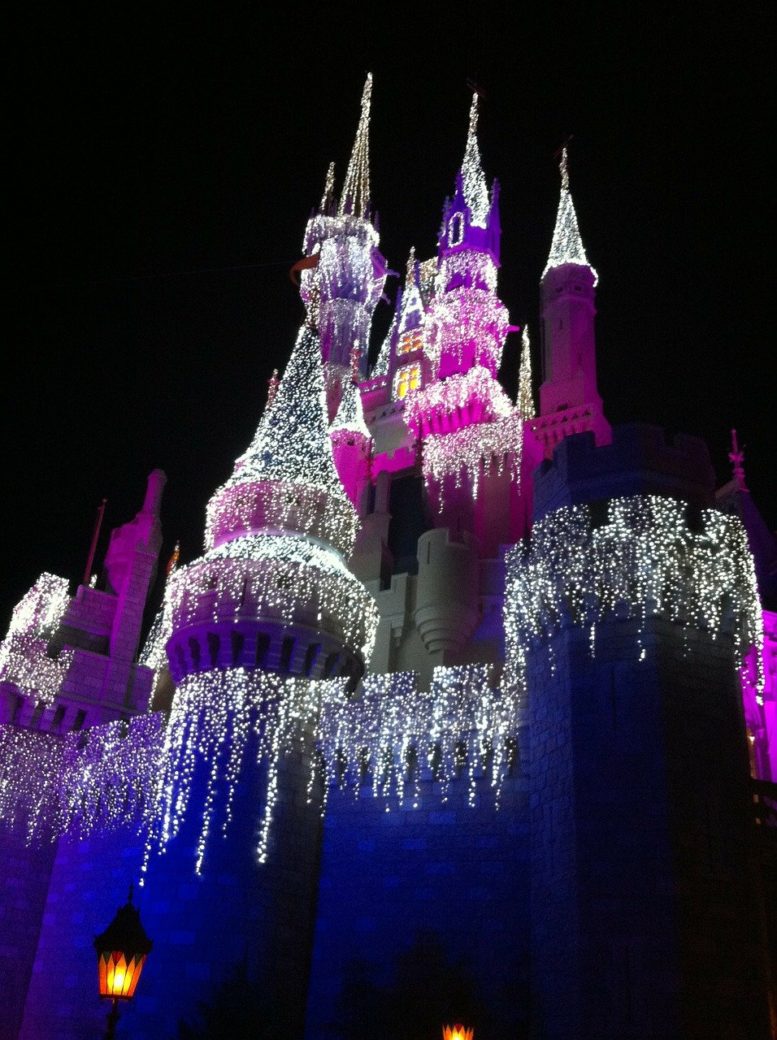 It’s Christmas day. All the gifts were unwrapped, or so the kids thought. We handed them the hidden envelope. A three day Disney pass. They squealed. It’s what dreams are made of.

Moving to Florida, we never took advantage of the annual pass. No matter how much my kids begged. Orlando had been a dream; a once in a lifetime for me growing up. I wanted my kids to have the same attitude about it. I planned their childhood memories with precision: Magic kingdom—when they were young enough to gasp at the sight of Cinderella, Hollywood studios—when they were brave enough to duel with Darth Vader, and Universal—when they were tall enough for every rollercoaster. Every trip was the last. Disney is not to be taken for granted! What memories: my daughter in her princess dress darting after Mickey–—she would get her autograph book filled, be damned. My son decked with a Jedi cloak, Darth maul face paint and a light saber; his blue eyes—wide as saucers, ready to take on Vader. Their gasps as Tinker Bell lights the castle. Their shrieks as they ride Thunder mountain. My heart as I watch my husband recoil in the haunted house, making our kids feel a little braver.

Memories once treasured, now eclipsed. A new memory embedded in my mind—my bedraggled, exhausted, cantankerous family begging, “Get me out of this hell hole!”

There’s many decisions I’ve made in my life and thought what was I thinking? With honest reflection, however, I can usually find the logic in my lunacy. Not this time. This time it boggles my mind that I thought two things were a good a idea: One, going to Disney at Christmas time—I figured it would be magically festive—something hard to conjure when it’s normally eighty five degrees. Why it didn’t occur to me that, literally, the rest of the world has the same idea, I will never know; Two, going to Magic Kingdom with anyone over eight years old is the most preposterous concept to ever be dawned. Have you ever seen a grown-up wait in line for Santa’s grotto—without a child? No, you haven’t—because, that is ridiculous. Engagements at Disney? Honeymoon’s at Disney? Please, more like divorce at Disney by the time we were done.

What went wrong? Well, what can’t be helped is the weather. It rained. Not just Florida, mad pour and then you’re done. Nor just the regular rain that frizzes your hair. It rained, like end of days. I had suggested we pick up the plastic, National Lampoon rain-coats—but let my husband dissuade me. We were not THOSE people. The rain would pass. Except it didn’t—and yes, standing in a three hour line, shivering and wet through, we did look like THOSE people; stupid people.

Three hours you say? Yes, three bloody hours. Not just for Star Wars and Avatar, which we had braced ourselves for, but everything down to Peter Pan. And that’s where I felt cheated. Of course I knew it would be busy, but I had faith in Disney. I expected them to cope with their maximum capacity. Having not, I can’t help but accuse them of shafting the customer for profit. I mean, would it kill them to build a second Peter Pan ride?

Take the new Star Wars ride. We were wet, cold and miserable, but determined. Stood in an eternal snake line we had time to take in the phenomenal sight of the Millennium falcon, docked in Galaxy’s edge. Once inside we ignored the fact the air conditioning was set like a meat freezer (not accounting for us being wet and it being an unusual forty degrees outside) to enjoy the scene—so meticulously put together by Star Wars lovers—every detail satisfying the geek’s critical eye. Once inside the Millennium falcon, I ignored that after being stood in line for three hours, I was suddenly being rushed through the actual experience, resulting in a frantic selfie by the holo-chess board as the staff hurried us to take our seats. I ignored it all to make sure I enjoyed the ride. You can’t not, in fairness, it was fantastic. However, it’s just a simulator when all’s said and done. Again, at a profit of 10.44 billion U.S Dollars, would it kill them to have extra?

Once upon a time, I recall applauding Disney on how organized it was. How you didn’t perceive the lines to be long because you were always moving, with something new to look at. Well those days are long gone, and I blame the Fast Pass.

When we were in line for Peter Pan, my soul died. We all remembered it fondly, so committed to the line. But standing in one space for too long reveals the cracks in your family. My teen kids, I noticed, are annoying, agitating, little assholes. My husband is a man child, and I’m possibly on the spectrum. In difficult situations, I zone out to survive; dentist, giving birth, funerals—zone out. This is hard to do in a confined space when your kids have a spacial awareness deficiency, and your husband entertains himself by tormenting the kids. Roll on two hours, the ‘play fight’ resulted in a kicked shin, with my husband yelling out in pain, in a line full of kids. To clarify, my husband yelled ‘fuck me’ in a line full of kids—at Disney. So help me God.

Trapped in a line with my trailer-trash family, the incessant sound track of You can fly instils a sense of being mocked by Disney overlords. The intercom kept announcing the ride was working, so why weren’t we moving? I tell you why—Fast Pass.

Using our sacred fast pass for the Tower of Terror, we were told there had been a problem and to come back in an hour. So, of course, when we did, we jumped the line along with all the other fast pass holders who were supposed to be on at that time and the time before. That’s a lot of people jumping the line at once. I realized that is what happened to us. This glitch in the system doesn’t just slow the line, it brings it to a grinding halt—for hours. I can’t believe this is acceptable.

And the crowds, heavens above! One release of their hands and your family is swept away, reminiscent of Jamie’s separation from his folks in Empire of the sun. If you can make it through the swarm without getting bulldozed by a determined woman on a mobility scooter, you may get a somewhat decent spot to view the parade, if you’re prepared to stand your ground.

By the time we hit Animal Kingdom on the third day, we were spent. We had argued, sulked, forced smiles for instagram, gritted our teeth as we were charged extortionate prices for a soggy sandwich, that, you guessed it, we had to line up for. When the heavens opened again—and once again we did not have the plastic fantastic cloaks, we cracked. We decided to do the Avatar ride then call it a day. Bail after one ride, money well spent. lets get out of this hell hole.

Wait, not so fast. Have you experienced Avatar? In the final hour we were blown away by the epic land that is Pandora. “We will have to see it at night,” we said. We got goofy at the sight of an avatar sleeping in his tank. We put on our 3D goggles and soared through the Pandora landscape on the back of a Banshee. Oh my God, it was magnificent. I felt tears form at the end I was so overwhelmed with the absolute sensation of flying through a stunning alien world. “We have to do this again.” we said.

And that’s why Disney wins. (or Orlando parks as a whole) We laughed when a Storm Trooper told our son to move aside. We gazed in awe as the fireworks exploded over the castle backdrop. We chased Kylo Ren down the street like he was Shawn Mendes. We shrieked in the dark on Space Mountain. We screamed as we plummeted on the Tower of Terror. We made memories. Despite the misery. On the worst day, with the worst weather, with the worst family, Disney gives you something that supersedes the cynicism. It gives you that spark of imagination you lose with every passing year.

Yes, Magic Kingdom is now a bit of a stretch of that imagination. Without small kids to see it vicariously, for me, it was a stretch of my sanity. Yet, the experience of submerging in another world—a favorite movie, is a make believe that is impossible not to enjoy. Avatar, Star Wars (Harry Potter at Universal) don’t ignite the small child in you; they ignite the older child in you, the angst child, the teen child that used a two hour movie to escape the stresses of life. That’s why we endure three hour lines, shoddy food, crowds and bankruptcy—for a two minute experience of darting through space at light speed.

So, will I go back to Magic Kingdom? Without small kids, nope. At a push maybe to see the fireworks with a hopper ticket. But we’ve already promised ourselves to go back to the other parks—if not just to refuse to let the bad experience be our last. See Pandora at night. Do the Star Wars ride that wasn’t available. When it’s not raining, on a school day, when we’ve secured fast passes a year in advance. When the trauma has faded and the rose tinted glasses seduce us again.

Never ever in the holidays. We will go Skiing.