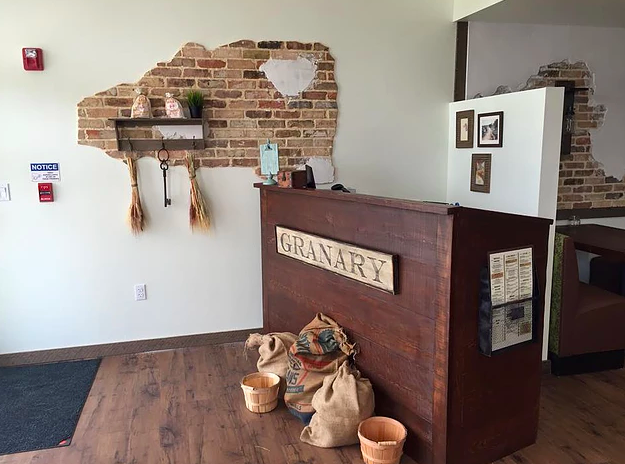 I shoot down Lorraine to get to SR64 so it was only because we were dropping the pup off at the Woofdorf Astoria that we were north on LWR Boulevard. Now I have a few friends that live that way, in Arbor Grande and Mallory Park, so I’m a little blown away that they have never suggested The Granary for lunch. I knew it was there (by Ace Hardware) I had heard it was owned by the previous owners of MacAllisters on Main Street, so there was absolutely no reason for us not to have tried it, other than we are not breakfast people. Driving by, however, I noticed people sitting outside for lunch! My hubby suggested we give it a try. I’m so pleased we did.

We accepted seating outside because it was so busy. So I just got a quick glimpse on the restroom run. It’s decked out with a wholesome, barnyard kind of style, with booths, but still fresh and modern. The outside area isn’t much to write home about. Apparently, there are restrictions in that plaza, which is short-sighted by developers, I think. However, it serves it’s purpose so it was fine.

Our waitress was really nice. Considering they were so busy, she took the time to explain the menu and what she liked best. I took her recommendation and ordered the special – Crab Cake on a Brioche Bun. My husband had the Lamb and Feta Burger. The food was presented on wooden boards, bistro style. It tasted as delicious as it looked. My husband inhaled his Lamb and Feta Burger. It should have been a carb Christmas, but somehow, maybe a chef could explain, left me feeling light and satisfied rather than stuffed and gross.

It’s great to have a good local for lunch. It makes it so easy to get people together if you don’t have far to go. So, I’m definitely going to be suggesting this little place for lunch with the ladies. Oh shoot, I better check if they serve alcohol…..